For a little light reading and viewing, I’d like to share some of my favorite martial arts video clips. People around me and I myself sometimes quote some of these lines. This may be to lighten the mood, or to make a point.

Here’s a link to the longest clip in this blog. It runs about four minutes. Parental advisory: it contains stabbing and fake blood. But don’t worry, he shifts his internal organs so it doesn’t cause damage. The video also contains hilarious parody of an instructor randomly doing karate moves and even a series of apparent kata motions while he’s talking.

I think this is the moment – link here – in the first Shrek movie when Shrek truly falls in love with Fiona. This is when she singlehandedly takes out Robin Hood and his gang with many spinning kicks and Matrix-like moves. Personally, I like the surprise element when we find out that this apparently dainty princess can take care of herself, and then some. 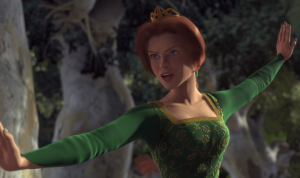 If you have not seen Diamond Dave – spelled “Diemon Dave” – you are in for a treat in this short clip. This ninjutsu teacher is brimming with character. I love that he is concerned with the moral side of teaching martial arts. That shows when he says “Don’t go ninja-in’ nobody who don’t need ninja-in’.” Also he warns against using the moves at home on kids or dogs.

I regularly quote the “Bow to your sensei!” line in the 2004 movie Napoleon Dynamite. I do this because it helps me describe the opposite of mutual respect. And mutual respect is what we promote at our dojo. Less often, the “grab my other arm” quote comes up. Here’s a link to a short compilation including both of those from the Rex Kwon Do scene in Napoleon Dynamite. Another oft-repeated quote is the one about the roundhouse kick to the face, on video here.

If you haven’t seen Napoleon Dynamite yet, I highly recommend it. It’s about the trials and tribulations Napoleon has in high school. It’s not in polished Hollywood fashion. This movie is full of quirky characters, and what I would call bland humor. Which I find hilarious. Watch it when you have some quiet time to take in a unique movie. It is not martial arts based, but the themes are universal. And that is what I like about all of these video scenes. Just about anyone can appreciate their humor.