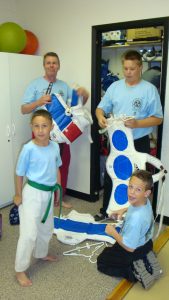 We praise Baby Boomers for blazing trails and we at East Valley Martial Arts in Mesa have our own black belt baby boomer doing just that, in karate. Most at our dojo have met Mr. Marty Siemon of Tempe, and many have had the opportunity to learn from him, or train with him.

Normally we would not put a black belt up for testing if they were here for six months, gone for six months, and then back to training again. But as a snowbird, Siemon Sensei lives on the other side of the country for half the year. Many retirees make that lifestyle choice, so they can take advantage of the best weather, and better enjoy life.

Because of that lifestyle, it has taken Mr. Siemon longer than usual to get to where he is in his training, but when living locally, he participates at the dojo regularly and trains hard. Siemon Sensei also helps teach weekly when he’s in Arizona, and he takes that black belt responsibility seriously. He makes sure he has brushed up on whatever he may be asked to teach. He also keeps up with the prescribed curriculum, practicing at home, whether that is in Arizona, or in Michigan.

You may have noticed that Mr. Siemon acts as a good samurai at the dojo, always aware of those present and those arriving. He respectfully greets young and old alike with a handshake. Another thing that makes him an indispensible asset is his dojo support. He stays informed about dojo current events by reading the newsletter, listening to the instructor’s announcements, and asking questions. When in Michigan, he e-mails regularly, checks up on the dojo and students, and sometimes asks questions about a particular kata or exercise. When in Arizona, Siemon Sensei does his best to attend or support events, like participating in demonstrations, or Spring Camp.

Outside of the dojo, Mr. Siemon has a family, with a grown son and daughter. His wife, Linda, gives moral support and encouragement in his karate. They get to spend time with their daughter when they are in Arizona, and Mr. Siemon’s mother when they are in Michigan. He likes nature and the outdoors and spending time doing things like fishing. He enjoys golfing, and is a college sports fan.

We adore Mr. Siemon at our dojo where we teach all ages. Mr. Siemon says that with us, traditional karate for adults in the Mesa, Gilbert, Tempe, AZ area is a fun part of a healthy lifestyle. We enjoy having him, even if it’s only for half the year.