One of the perks I have as a martial arts instructor is seeing karate kid fun first-hand. Kids say and do the some of the funniest things. We run a tight, disciplined ship in class, but we have fun too. Your perk today? You don’t have to put in the hard work, sweat, concern, tears and loads of physical energy that I do as a teacher. Yet, you get a peek here at some of the funniest things that go on at the dojo.

Mom was buying her son a cup and supporter so he could participate in sparring. The boy declared, gesturing toward a female dojo mate, “That’s not fair, why doesn’t she have to wear a cup and supporter?” I didn’t respond, but instead looked at his mom as if to say, I’ll let you answer that. Sometimes the karate kid fun is really more hilarious for the adults than kids.

We often tout the importance of the Dojo Kun, memorizing it and following it. We also go over the history of where these important values came from. In class, I said, “You’ll get an extra Great Job ticket if you can tell me who wrote the Dojo Kun.” 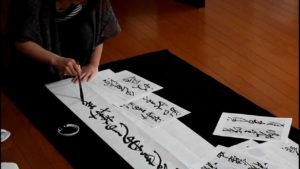 A young beginner raised his hand and his wild guess was, “Jesus?” His guess was many centuries too early and on the wrong continent, so I couldn’t help but chuckle a bit. At least he tried. A lot of karate kid fun happens spontaneously when we give it the old college try.

We had a pre-teen student who was all set to travel to the U.R.K.A. headquarters to test for his first junior black belt at Summer Camp. He told his mom, “I’m going to camp a boy, and I’m coming back a man!” Again, we adults got a chuckle out of this karate kid fun example. But what he said was true. The experience of testing for black belt at camp, alongside karateka from all over the country and the world, with a large, high-ranking black belt panel, will make you grow in many ways.

One rule is that male students must wear groin protection in order to spar. We had a particular junior-high-aged kid who repeatedly came to class unprepared to spar. I offered that he could borrow the groin protection from the Redman suit so he could participate. Surprisingly he took me up on it. He wore just the groin protector, strapped on over his uniform. He looked like a sumo wrestler with a big, red diaper. We all had to laugh with this student and his karate kid fun. He pulled it off so well that later when one of the younger boys forgot his cup, he asked to wear the Redman groin protection. 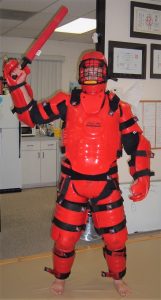 When I first saw flossing, a.k.a. the floss dance and the backpack kid dance, I didn’t know what I was seeing. When I was talking to a student, or when they were supposed to be lining up, or standing in line listening to the instructor, I would randomly see this weird spasmodic, repetitive move. To me, this was just a little too much karate kid fun.

Eventually I learned that it had a name and that its origin in popularity was in a Katy Perry routine. Flossing looks okay in the right time and place – the dance floor. But I purposefully refuse to learn this dance move because of how my karate kids unconsciously start it mid-conversation and at inappropriate times. I don’t want to get bit by the flossing bug.

I’m all for karate kid fun, and karate fun for all ages. That’s one of the things I love about my job. We just need to make sure we limit the weirdness and keep the discipline at the right times.