Changing karate titles are a natural part of our dojo’s martial arts culture. In Japan, people have changed their names: when they became the head of a household or a company; to demonstrate allegiance; and when their social status evolved, among other reasons. They have even changed their names to shed bad luck. And artists might change their names for each different media they pursue. In karate, our names or titles change when we make significant progress in our rank.

Let’s take our theoretical student Jane Doe. Say she’s an adult, 24 years old, when she joins the dojo. Her karate title is her first name. Her dojo mates simply call her Jane. After she’s intermediate (before black belt), if she starts teaching children, she goes by Miss Jane. Then, after achieving her first black belt, we call her the more proper Mrs. Doe (if she’s married – she could alternatively be Miss Doe or Ms. Doe). Her official title is Doe Shidosha. Shidosha is the Japanese word for teacher. (A friend with a Japanese spouse said that calling a higher level black belt Shidosha, instead of Shihan, Renshi, etc., is proper and not discrediting them.) At this point of black belt, Mrs. Doe’s real training begins, and she expands her knowledge horizons and her responsibility. She jumps in depth into her teaching and her dojo leadership role.

When she gets to Nidan (2nd level black belt), Jane earns the new karate title Doe Sensei. She’s now an integral part of the dojo leadership. Sensei literally means “before born.” But you don’t have to be older to be someone’s sensei. As at the dojo, you were born into karate before them if you have more experience, age notwithstanding.

I typically still call black belts who are lower in rank than me Sensei, if they are a sensei, because I want to set a good example for any other lower ranks than them who might hear. If I start calling her Jane, then little Johnny will likely follow my lead. And If I call her Jane regularly in private conversation, she will likely call me Jenifer. And I expect her to hold me to a higher standard. Just as I hold Jane to the dojo’s high ideals. So she will usually hear her title spoken from me.

At both Sandan and Yondan (3rd and 4th levels black belt), Jane’s karate title becomes Shihan. A shihan is a senseis’ sensei. They have the experience and rank to mentor black belts and help them step into the teacher’s role. Now we call her Doe Shihan. And each time we do, we recognize all the many years, dedication and hard work Jane has devoted to traditional Okinawan karate and our dojo. Plus, this subconsciously reminds her of the high responsibility that her rank demands: the many people who depend on her, and the living art that she represents.

RENSHI KARATE TITLE AND BEYOND

When Jane is a Godan and Rokudan (5th and 6th level black belt), her karate title is Renshi. This title recognizes proficiency after many years in martial arts. Our aim for a Renshi is that he still “works in the trenches.” Not retired or too old or tired to actively teach. But Renshis actively pass on the knowledge and use their rank as polished instructors to help students polish up their technique.

At 7th and 8th level, I imagine Jane will be Doe Kyoshi, and at 9th and 10th Doe Hanshi. And if she gets to 10th, it will be after a lifetime of practice and dedication to the martial arts. She will probably be the head of her own organization by then and have one foot in the grave. 10th level may even be awarded posthumously. But our dojo has not yet made it to having an instructor at the top of that mountain. We are just enjoying the journey on the path in front of us.

Many Japanese karate styles have charts that are similar but varying, particularly for measuring western karate practitioners. They say you can earn this rank and/or this karate title after this many years of training and at this age or older. But if you look back at how things have been done in Okinawa, they have had plenty of younger, higher rank black belts. We look more at the person’s dedication in the art, wisdom in leading, knowledge in Ryukyu Kempo, and involvement in the dojo than we look at the numbers.

Especially for new students, it’s tricky to change what you call the people who play an important part in your training. But after a while, and with a little focus and understanding, the changing karate titles become easier to navigate. 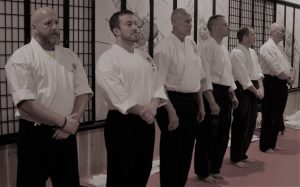