Traditional Okinawan karate can be life changing for people of all ages. But it has great power when it’s a consistent part of the life of our karate youth. As they grow, children form their values, habits and ideals. Traditional martial arts can positively impact those things and allow them to improve their lives for the long run. Here are the top five lessons that karate youth learn in childhood training:

Self-responsibility is essential for becoming a contributing member of society. We are talking about consequences, accountability, or the law of cause and effect. A prison guard once said the biggest reason adults end up in prison and repeatedly return there after release is because they didn’t learn consequences in childhood. At the dojo we reinforce with karate youth that their actions have an effect – both on the positive and the negative end of the spectrum. This is most effective when karate parents allow their children to reap their consequences and also reinforce this at home. Here is a link to help with that.

One of the things I love about being in martial arts is the influence of the positive attitudes of my mentors and other karate practitioners. From their influences and through my karate training I have improved my own attitude. And that has helped in my life and in my co-running of the dojo in numerous ways. We promote a positive attitude with all of our students, and strive to teach karate youth to master this skill. In the situations where we have no control, we can always control our own attitude.

At the dojo, respect is inherited, passed down, promoted and expected. We practice mutual respect, instead of domineeringly demanding it. Our instructors have respect and regard for every one of our students. And we expect all of them to return it. Karate youth learn from the examples around them at the dojo to be respectful. We also appreciate and promote the powerful lesson of having respect for oneself.

SELF CONTROL FOR KARATE YOUTH

Karate youth learn about the principle of self-control at white belt. It is in Dojo Kun number five. But we don’t just give it lip service. We expect students to practice self-control starting from the very first lesson when we line up and stand still to listen to the instructor. Restraint is reinforced when practicing partner drills. And it is a major focus in light-contact sparring. If you practice a habit regularly, it carries over into other areas of life. When a teen learns self-control, it makes a big difference in their high-school years.

Michael Newland Renshi founded the special community of our dojo in the mid 1990’s, on the border of Gilbert and Mesa, Arizona. Gauger Renshi and I became a part of it in the late 1990’s. The dojo is a place where you work hard and make mistakes and instead of laughing at you, we support you to persevere. We welcome and value new students, and in turn the newcomers learn to value and support their dojo mates and dojo community. This is where karate youth focus on their personal growth in a positive, supportive environment.

Our young people can be highly influenced during their formative years. I have faith that even if a person only trains in traditional Okinawn karate for a few weeks that they can benefit from it. But I know that the longer you are a part of the dojo community, the more benefits you will gain and the longer they will last. Karate youth who have grown up in the dojo reap the benefits of these five lessons, plus many more. And they each have their own things that they appreciate about their training; their families do too. This was well-articulated by the new wife of one of our former karate youth. She said, “Thank you. You are a big part of the person he is today.” 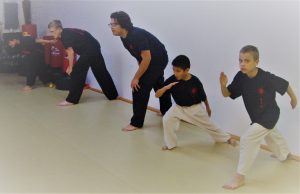