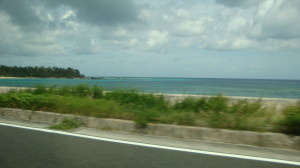 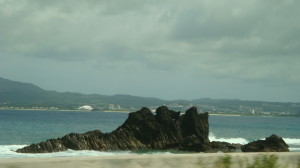 Thursday morning, we drove north to Ocean Expo Park located on the Motobu Peninsula.  The highway was fairly scenic, but the overcast weather and early hour kept lulling me to sleep on the ride.  Then, as we neared the park, the road went up the coastline.  I tried to psyche myself up to wake up. 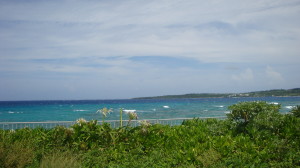 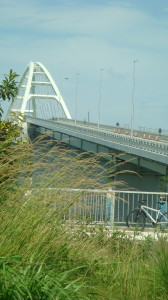 The group’s goals this morning included visiting the Okinawa Churaumi Aquarium and the replica of the traditional home. These tourist spots reside in Ocean Expo Park, a huge, ocean-side, state-run property.  We parked and then had to go down several sets of stairs to get to the aquarium.  I already felt exhausted, and the day was just beginning.  So I dreaded having to come back up all those stairs that same morning, when it would surely be hotter. 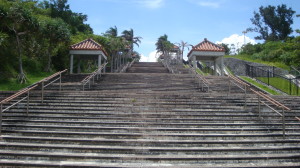 Ocean Expo Park lies right by the beach. Yet it was very hot, and not surprisingly still humid.  We caught a bit of a dolphin show at an outside tank.  Then we made it to the aquarium, admiring its beautiful exterior. 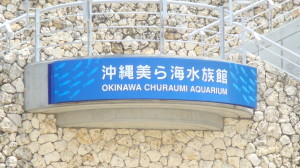 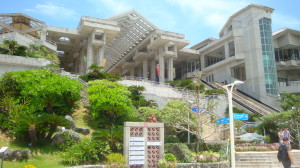 The Okinawa Churaumi Aquarium provides a big draw of tourists to Ocean Expo Park.  The best part of the aquarium was the touch tank where you could pet sea creatures.  We took an elevator up to the top of the whale shark tank and traversed a walkway, looking down into the sharks in the water.  This was a neat concept, but it was difficult to see through the water’s moving surface and it was hotter and more humid in this area than it was outside.  Tourists crowded the whole place.  Overall, I might give the aquarium three out of five stars.  (But I have been spoiled by the five-star Monterey Bay Aquarium in California.)  I enjoyed the nice time spent with family and friends. 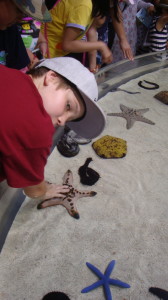 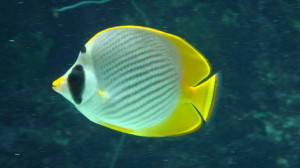 After the aquarium, we went back up the many stairs of Ocean Expo Park and over to the replica home.  The recently-built structures replicated an old, traditional homestead.  We loved that we could go into the building.  Traditional tatami mats covered the floors.  As tradition dictates, you had to take your shoes off to enter.  It had sliding rice paper doors/walls, and was built like a traditional house.  The home held sparse furnishings.  Two women staffed it.  One of them taught samisen lessons to a young mother who was there with her husband and kids. 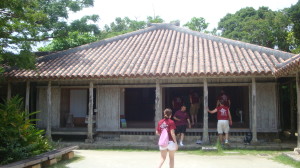 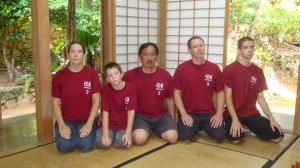 I enjoyed exploring the small, pretty yard, which had a lot of plants, many with plaques telling their Latin names. Much of Ocean Expo Park holds a multitude of tropical plants and trees in all sizes and forms. 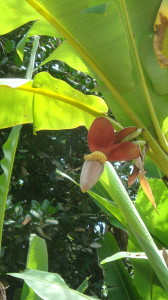 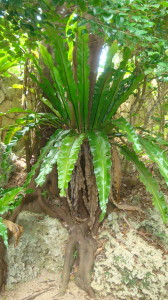 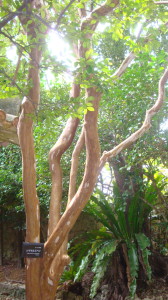 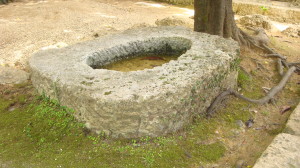 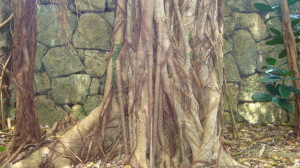 After a little while, we headed out from Ocean Expo Park.  The next stop on our Thursday adventure?  Nakijin Castle! 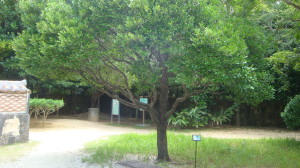 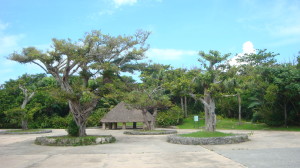