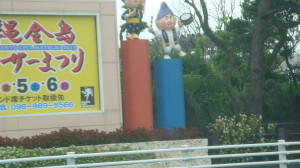 The huge sign, above, bordered a large, open park.  We stopped at a large grocery store so we could go shopping for food to grill at the Wray’s.  Amy had told us about such fruit pictured below.  Now we finally got to see it with our own eyes.  They sell premium fruit displayed for gift-worthy shopping.  These watermelons were in the high 20’s in American dollars.  They were not huge, but they were picture-perfect. The next morning, Dave was in urgent care for chest pains.  It was the Friday before the 4th of July weekend, and since he wasn’t feeling well, he figured this was his last chance to be seen by base doctors before the weekend.  He had run himself so ragged being such a gracious host to our group, that he came down with pneumonia. Here’s a great mailbox we saw on the way to check up on David. 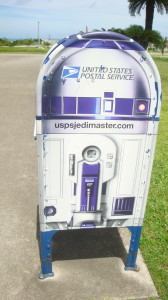 We returned to American Village, and back to the arcade’s drum game.  We took the opportunity to do a little more souvenir shopping. 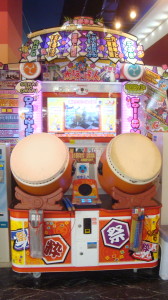 I saw what appeared to be street art on a wall in American Village.  This is something I appreciate more since I saw the documentary Exit Through the Gift Shop. 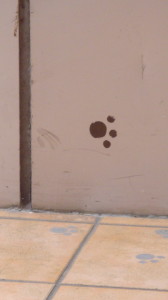 After spending the day running around, meeting up with people, and shopping, we had the choice of taking the evening off or going to meet with the local newspaper, and train at Kiyan Sensei’s dojo.  I took the chance to relax and explore our local neighborhood, walking down to a restaurant for taco rice (a delicious modern Asian fusion food!), and getting Crunky candy: 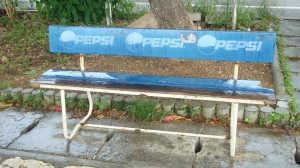 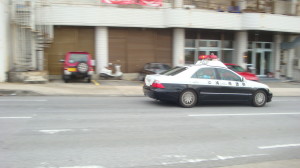 It started pouring rain while we were in the small convenience story shopping for our dessert.  We waited under the eaves until it slowed, then started walking and made it as far as a bus stop with all the modern conveniences, including shelter.  We sheltered out of the rain there until a bus stopped to pick us up and we apologized and rushed on down the sidewalk. 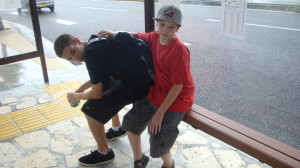 Those of our group that went with Kaicho got their picture in the local newspaper, with an article about us “Blue-eyed Samurai.”  They also trained with Kiyan Sensei’s dojo, in an indoor soccer stadium with AstroTurf.  That was about it for our last Friday in Okinawa.  We had plans to visit Shuri Castle the next morning. 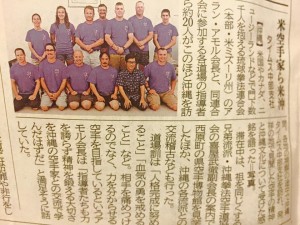