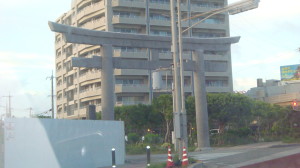 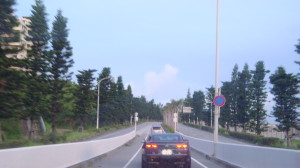 We left Okinawa on one of the first flights Sunday morning, but this was not the end of our trip.  It was not even the end of my visit to things Okinawan. 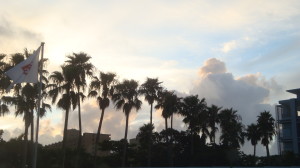 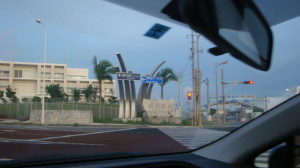 It was a nice drive to the airport in Naha, with fluffy clouds in the sky.  We actually got to the front doors of the airport about 5 minutes before it opened (4:55 am).  A security guard told us to wait outside until it opened.  When it did, we walked toward the check-in desk.  There we saw the staff starting their day by bowing to their superiors, then turning and bowing to the customers at large.  On all the Japanese flights, the flight attendants did a bow in unison toward the customers when they were introduced on the intercom at the beginning of the flight.  Here’s the view from the tarmac.  The Naha, Okinawa airport is similar to others: 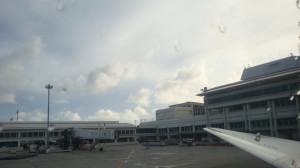 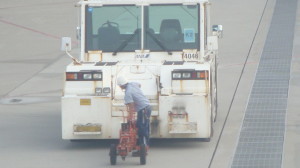 After our plane backed up and turned around, we started taxiing forward.  Then the men working on the runway stopped, bowed in unison toward the airplane, and then stood there and waved as we started our journey, leaving Okinawa!  I was impressed at the human touch. 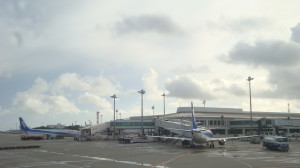 After we took off, we could see down to the bottom of the ocean’s water near the coast: 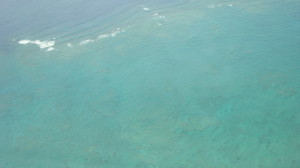 Here’s the coastline near the airport, as well as a small island off the coast: 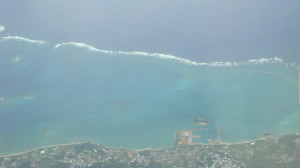 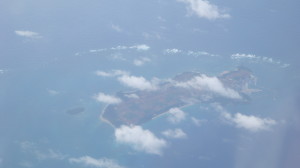 We rose above the clouds over Okinawa: On the Japanese flights, the planes had screens at the front that often showed footage from a camera at the front of the plane.  Sometimes it showed a map of where the airplane was, as well as its speed and altitude. 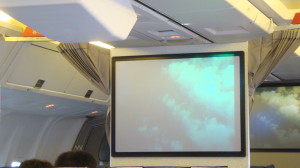 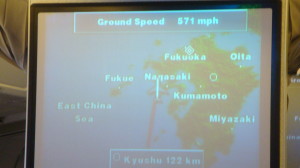 We had a layover in Fukuoka, Japan that was supposed to be a couple hours.  However, it was delayed an additional 7 hours due to a typhoon in Guam, which was our next destination. 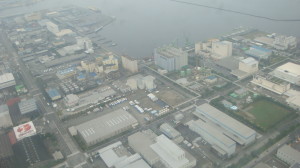 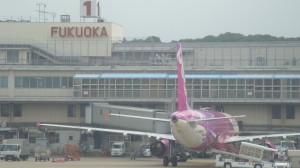 The thing we appreciated most at that time was that the airport was clean and spotless.  Many of us sat or laid on the floor to rest.  The airline provided lunch for us in the form of food vouchers to use in an airport restaurant.  We found an area closer to the gate that had a whole bunch of cubic footstools/seats.  We pushed these together and had acceptable beds.  But the airport was busy and it was difficult to catch some Zs.  Here are the Fukuoka, Japan airport’s surroundings: 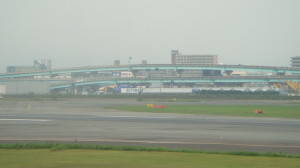 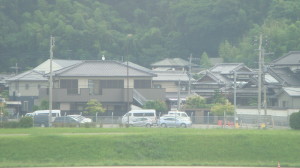 (I was so exhausted and travel-worn by this leg of the Okinawa trip that I neglected to take any pictures.)  The plan had been to arrive in Guam at 5:30 pm.  Then we could see some of Kaicho’s mother’s country.  With some sunlight, we could see where he grew up.  We would meet his family, then depart the next morning around 6 am.  With the flight delay, we got to Guam around 12:30 am.

Kaicho has family in Guam who were AWESOME!  They had two 15-seater vans, plus a car waiting at the airport.  They brought us to the homestead that had been Kaicho’s grandma’s.  When we arrived at his aunt’s patio/outdoor kitchen/dining room, they had a party set up with a huge spread of food.  About 25 people greeted us.  At least a half a dozen of his family stayed up with us on our relatively short visit.  We ate, visited and sang karaoke until 4 am.  It rained off and on, but the roof and tarps kept us dry.

When we had to leave, Kaicho’s aunt insisted that we bring some food with us.  I was hesitant to take food.  Still, I filled up a couple baggies with tortilla, rolls and delicious strawberry cake.  Kaicho’s uncle gave us all goodie bags with all kinds of neat little gifts.  I put the food in my Guam bag.  After our flight took off, I did not have access to our normal travel snack bag.  My stomach felt like it was eating itself.  Everyone around me was asleep.  Up there, in the air, I opened the overhead bin and looked in my Guam bag.  There I found the baggies of delicious homemade food from Kaicho’s auntie, and felt the family love (which I appreciated immensely, even though it was not from my own family).

P.S. Kaicho’s uncle sang the last karaoke song, “My Heart Will Go On,” dedicated to his visiting nephew.  This link is to a good male version.  It’s not of Kaicho’s uncle, but his uncle did get a perfect score on the machine: https://youtu.be/34FEvtXNx4g?t=36s