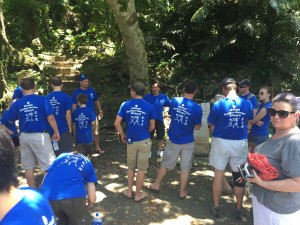 We visited the tomb of Uni Ufugushiku on the next part of our first full day in Okinawa.  Thanks to whoever took and shared this pic, you can see the main trail up the hill.  Chibana Castle is at the top.  On the way to the parking lot, we passed an abandoned van on bricks, as well as a lot of junk people had dumped at the base of the hill.  The main trail was roped off with a “closed” sign.  It was not currently maintained and deadly habu snakes lived here.  The TV crew advised against going any further. 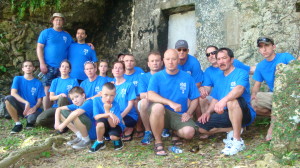 Depue Renshi and Peery Shihan bravely scouted ahead on the back trail to check for habu and make sure it was safe.  After they returned, we cautiously, yet with a lot of noise (habu are shy and will avoid confrontation if given a choice) went single-file up the trail to the tomb.  I felt it was the respectful thing to do to pick up the litter near Ufugushiku’s tomb.  You may be able to tell this was a very emotional part of the trip.  It’s one of those “you had to be there” moments. 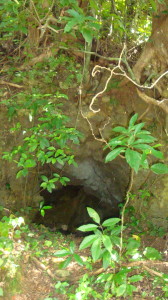 We had pushed our luck enough and decided not to go past the tomb to the top of the castle.  We returned to the parking area.  In the stone restroom, I was willing to brave the large banana spiders and their webs across the stalls, but a snake among the brown leaves next to the primitive, un-kept squatty potty prevented me from using it.  I rushed out of there faster than I’d moved all day.  We wondered about this small cave (pictured above) at the base of the hill.  It went back farther than we could see. 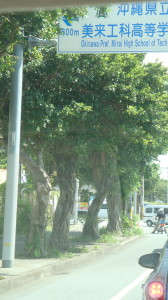 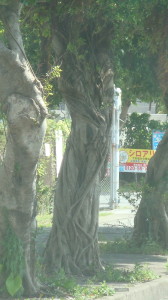 I was in awe of all the tropical plants – here are some trees that lined some of the roads.  I was surprised whenever I saw someone watering the plants.  It seemed humid enough that they wouldn’t need it, but apparently they did. 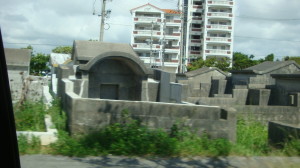 We saw tomb views.  Tombs like this appeared near houses, and some sat right next to homes or stores.  In Okinawa, death is a normal part of life, and they like to keep family and ancestors close, even when they’re dead. 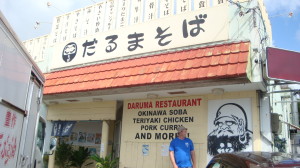 We stopped at the Daruma Restaurant for a late lunch.  All the food was delicious and reasonably priced.  We took up over more than half the restaurant, but the ladies working there happily accommodated us.  We put our money in a vending machine inside the door. Luckily it had pictures of the different food option. The machine provided a ticket for the meal you selected to bring to the lady at the counter.  When an order was done, the waitresses brought it around the whole restaurant on a tray to try to figure out who had ordered it.  Like I said, it was delicious, and worth the wait.  Mr. Kaleta and I shared. That way we got to try more traditional Okinawan food: goya (bitter melon) with eggs and tofu, fried pork and vegetables with rice, and a soba bowl.  I also tried a yummy vegetable tempura patty.  David taught us the tradition of putting your palms together and saying, “I te take masu” to start a meal and “Go chi so sama deshita” to end it.  Our group ended that way, and David said that the smiles on the faces of the ladies working there made his day.  (Thanks to Amy and David Wray for the photo below, and for being such awesome hosts.) 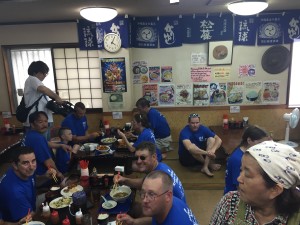 On to Okinawa Trip #4