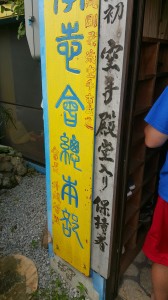 The next morning, we went to the Karate Museum, run by Hokama Sensei.  Here are some shots of the exterior.  I accidentally erased the pics from my camera, and am grateful to everyone who shared these photos!

We were impressed by Hokama Sensei’s beautiful traditional dojo.  It was tidy, had all the training gear needed, and had a shiny, spotless wooden floor.  Hokama Sensei was very friendly and hospitable, and he spoke English, so we were able to get to know his great personality a little bit.  For a modest entry fee, we went upstairs to the museum. We enjoyed seeing all the karate-related memorabilia that Hokama Sensei has collected.  He has an area in the museum to show homage to Seiyu Oyata Sensei.

This was the first place I saw an ingenious water-saving toilet design (I never did take a picture, but here’s one I found online), which was not uncommon in Okinawa.  Instead of a flat solid porcelain top on the toilet tank, there was a small sink.  When you flush, clean water automatically pours from the spout into the sink, then drains through a hole to fill the back of the tank. We did Naihanchi Shodan – see video link below, thanks again to the Wrays.  We were honored to meet the World Weapons Kata Champion, Yogi Sensei.

Hokama Sensei wrote a book called Timeline & 100 Masters by Doctor Hokama Tetsuhiro, which I am reading, and I recommend for karate practitioners.  I am thankful for Hokama Sensei’s friendly hospitality.

It was hot by the time we were done at the museum, and there was a vending machine with cool drinks right outside.  These vending machines were plentiful on Okinawa – most areas had a few on every block.

More about Hokama Sensei and the Karate Museum: http://www.tetsuhirohokama.net/

On to Okinawa trip #5