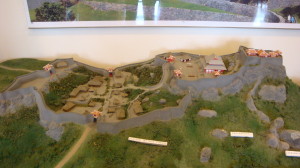 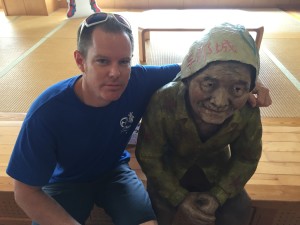 Next, we were off to Katsuren Castle.  Here is a model of the whole thing, with an artist’s rendition of the buildings.  It was a bit of a drive to the east side of the island.  We drove past the bay where the Battle of Okinawa started.  Across the street from Katsuren was the gift and snack shop.  Many of us were hungry, and grabbed a quick snack to fuel our bodies for this adventure.  Gauger Renshi made a friend there. 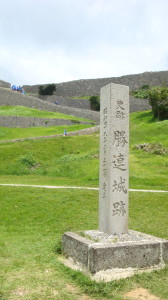 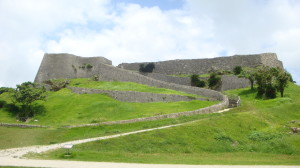 Katsuren was very prosperous and powerful under the rule of Aji Lord Amawari, in the mid 1400’s.  The Ryukyu Kingdom was in the process of unifying, but Amawari had his sights set on ruling the island.  He triumphed in some battles, but ultimately was defeated and destroyed when he tried to take over Shuri. 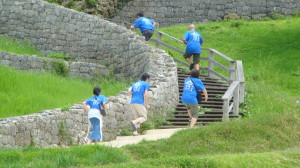 As we crossed the street to the castle, it was misting heavily, which made it more humid and made the heat more intense and damp.  This did not stop the island guys from running up the “clockwise stairs,” but it stopped me.  The Tokyo TV crew was professionally obligated to try and keep up, running with their equipment, for the sake of the show.  But they did, and they got some good footage. 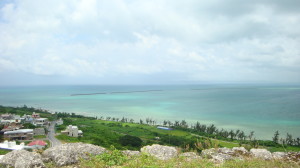 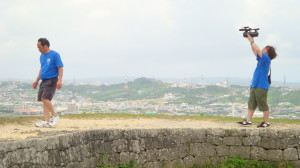 Brenda took some video with our camera (thank you).  The first one (links below) is very short, of us bowing, but it is significant in showing respect to our martial arts heritage on location at one of the heritage sites.  The second video is of the group doing Pinan Godan at the uppermost level of the castle. 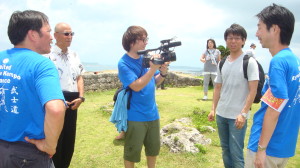 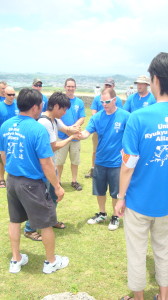 A local man inquired what we were doing, and thanked us for carrying on the martial arts that were born there.  This meant a lot to us.  He introduced his son, who asked Kaicho to teach him a pose.  Kaicho taught a palm press, and the son executed it on Gauger Renshi.  In this shot, Kaicho is saying, “here’s your pose.” 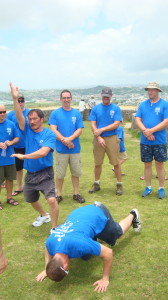 It was so much easier descending the stairs.  Lesson here:  When things are difficult, hang in there: they will get easier. 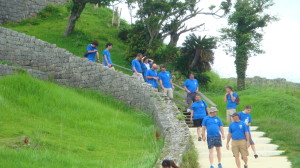 We ended the castle visit by having a much needed, much deserved, relaxing, delicious lunch at what I call the lucky cat restaurant.  The big tables had pits underneath to give the illusion of traditional Japanese tables, while using more western style seating. 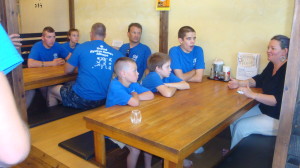 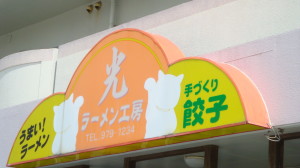 On to Okinawa trip #6