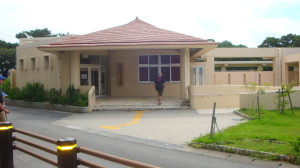 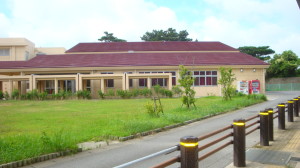 After our day of rest, we started Monday morning raring to go.  We went to Depue Renshi’s dojo to for karate training.  It was adjacent to a freeway overpass.  The Okinawan government owns this beautiful, large dojo.

This is similar to the budokan in Naha, Okinawa, and other budokans in Japan that are owned by the government.  I understand that Mikkeli, Finland has the same thing.  My understanding is that certain governments value training in martial arts, and they see the benefit of having their people pursue it – probably because it makes them better, contributing members of the community.  They probably see the physical exercise benefits too.  But it takes a lot of space for groups of people to move around, and real estate is expensive.  So, the government invests in a large building where instructors can take turns gathering with their students to teach.

Below, left shows outside the front door of the Okinawa training facility.  One of the large training rooms has a floating wooden floor; Corley Renshi explains it in the right photo. 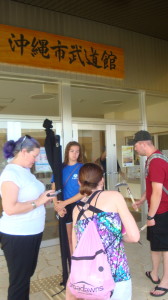 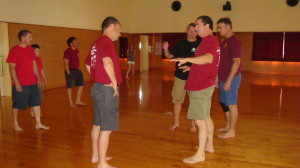 Here’s the waiting area with benches where we stashed our bags.  It went down most of the length of one wall.  Conspicuously missing (as seemed the norm in Okinawa dojos): air conditioners and fans! 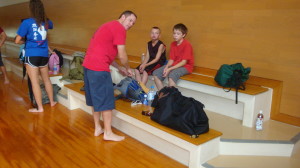 I missed out on some training because of a head instructors’ meeting.  I have got to hand it to you guys who worked hard that whole time.  Here are photos of us all training together. 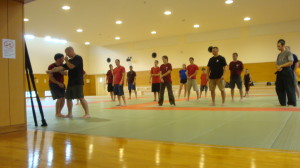 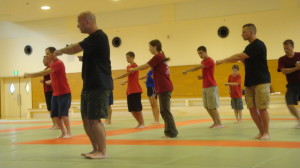 When that class was over, our lines filed off the mat.  I was physically spent and felt sick.  I caught a glimpse of myself in the mirror at the edge of the mat, and I looked like a corpse.  On seeing my pallid, sticky face with sunken eyes, I felt even worse.  A couple of us went outside to take a little snack break, after which I knew I’d survive.  Our t-shirts were all steeped in sweat, one person so much so that he literally wrung his shirt out over the grass outside.  (I’m purposefully not naming names here.)  Needless to say, we all felt we needed some freshening up after training. We returned to our lodging for quick showers and lunches purchased from the grocery store. 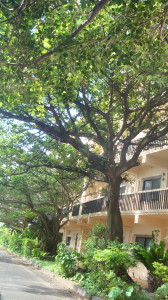 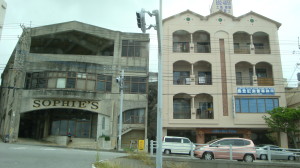 There are so many pictures and videos to share for this day that I will have to break it into a few sections.  As my journal says, Monday was, “Another long, busy, chaotic day.”  I’ll finish this segment with photos taken around town – mostly Ginowan City area. 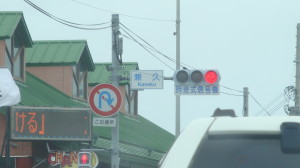 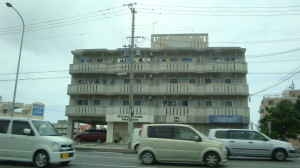 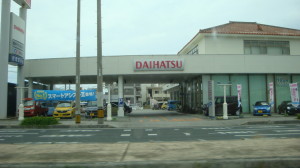 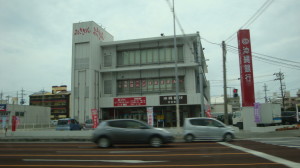 On to Okinawa trip #9