As an instructor, it breaks my heart when yudansha pull their support and attendance from the dojo. It also disappoints me when I learn that one of the U.R.K.A. black belts quit. I don’t even like to hear that black belts I know from other styles stopped training. When I shared the title of this blog with other black belts, one said they wouldn’t even read past the title, because there’s no good reason for someone of that rank to stop their training and support. But I assert that there are some good reasons for stopping. You’ll find a few here. This list is based on my reckoning of the top 10 most common reasons that I have seen that black belts quit:

Thank goodness our dojo didn’t experience this. But we heard it from a friend who heard it from a friend. His tween daughter enjoyed martial arts. Then an instructor spoke in support of using recreational drugs. He said something like he used them occasionally and was fine. That’s not the influence or role model a parent wants for their kid. Adult students also want to place their safety and well-being in the hands of an instructor whose mind is clear. A drug-using instructor would be a good reason black belts quit.

This story comes to me too often from outside our style. Usually, the parent of a young martial artist brings me this concern. Most people with this story say their child earned a black belt in Taekwondo. I mean no offense to anyone. I have met Taekwondo black belts who are very nice. The parents tell me their children got attacked or got in a fight and their poor technique didn’t help them. So their junior black belts quit. They feel like they made a bad investment of time and money. And I can’t disagree. Each karate student needs a challenge.

8: BLACK BELTS QUIT DUE TO LACK OF CHALLENGE

For some, it’s a feeling of, I need more self-defense practice, or hands-on skills. For one person it was, I could learn the curriculum in a few months. In the case of the first issue, we have fortunately had some black belts who brought this to our attention honestly. We focused on helping them improve where they felt lack, and they continued their training past that obstacle. With the second issue, we might not be able to help. That person completely missed the point of being a black belt and role model, supporting the dojo, and helping others learn and walk the path they travelled. That’s in addition to placing importance one’s own training, which should constantly gain depths of understanding (often through teaching) that can’t be written down on paper.

7: BLACK BELTS QUIT BECAUSE THEY PLATEAUED

This excuse is similar to the last one. This is not a reason to quit. As karateka become advanced, they should start challenging themselves in various areas and ways. Our black belts have the responsibility of promoting traditional karate. Branching out and doing that in new ways and new areas is a great way to get oneself off the so-called “plateau.” Ditto asking your instructors or dojo mates to help you on new goals.

6: BLACK BELTS QUIT WHEN KARATE WAS NO LONGER FUN

This is one for juniors. I have not heard this reason from adults. Because we understand the value in delayed gratification. And we have learned that working through hard tasks and hard times will earn rewards. We have grown out of the flash of instant gratification. Plus, we find ways to make difficult or dull duties more interesting. It’s too bad that some parents will let their junior black belts quit when they complain of no fun. We learn to make our own fun.

5: BLACK BELTS QUIT WITH TOO MUCH HOMEWORK

Here’s another junior-specific excuse. They say school is just too demanding and time-consuming to allow time for karate, so these few black belts quit. When they feel like they have too much homework, this is exactly the time when these students need to pull out their Dojo Kun’s perseverance, self-discipline and honesty, and apply them to their time-management skills. Our dojo has a full schedule of classes at least five times a week for black belts to choose from. With a little attention, planning and restraint, karate fits just fine into a sizable homework schedule.

Hobbies are another poor excuse sometimes used when black belts quit. Hobbies have importance in a balanced life. But karate is not a hobby. It provides a better way of living. A discipline that helps improve a multitude of areas including physical, social, and emotional spheres of life. With a little time management as mentioned above, you can have hobbies, and have your karate too.

This one is difficult. Many high school football teams and marching bands do conflict with all weekly karate classes. (Except for rare occasions.) If you count on a football scholarship to put you through college or a major league career, who am I to discourage you from your life goals? If you plan to make your living as a marching musician, this experience in high school may help get you there. Other than that, I can’t weigh the benefits of being a part of one of these teams. That’s because I didn’t join them in high school. I only know the benefits of the safe physical training of traditional karate. Plus the unparalleled leadership ingrained in black belts through teen years. Plus the positive support. And mentor-ship. And believe it or not, teamwork! I value the wisdom of one teen black belt who said that if you are going to pursue something like this that will take you out of the dojo, then you shouldn’t become a black belt in the first place.

2: BLACK BELTS QUIT DUE TO A GROWING FAMILY

When a black belt announces news of a marriage or becoming a parent, their instructors smile with pride. But they also cringe inwardly, hoping the family change doesn’t make their black belt quit. This comes not from pessimism but from experiencing this number two reason that black belts quit. It makes us rejoice even more when we are fortunate enough to have others who continue their training when their families grow. And we take pride in the benefits the new spouse gains because they are married to an active black belt. Or we are happy to see yet another child growing up in the dojo family.

1: BLACK BELTS QUIT DUE TO RELOCATING

You simply cannot be in two places at once. In these days, people move. And much more than in the past. A very common reason black belts quit is because they relocate out of the area. The bad news is that the dojo misses them as much as they miss being a part of the dojo. It feels like a lose-lose situation. The good news is they have skills that can help them start their own dojo or program. Or find a few students to train while they keep and hone their own karate. And many of them do, which helps traditional karate to branch out and improve the lives of others.

Now that I have poured my heart out to you about the top reasons black belts quit, I hope you have learned two things. One, I take the black belt rank seriously, whether it is my own, or a rank I have bestowed onto others. Two, if a black belt is considering quitting, they need to earnestly, honestly put a lot of heartfelt thought into it and sleep on it for many nights. And always discuss it with their instructor to work together on options. 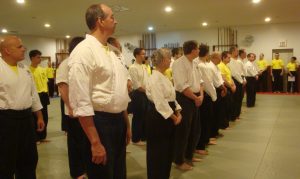