Romaji is simply the use of roman characters (such as the English alphabet) to write pronunciations of Japanese words. The Japanese language is a part of the traditional culture that we represent and promote at our dojo. As a custom, the Japanese language is written in a complicated mixture of the complex kanji (adapted from Chinese ideograms), hiragana and katakana. For people who do not recognize hundreds of these symbols, but who know the English, Spanish, or other alphabet for a romance language, romaji can help us learn Japanese. We use romaji when we write “karate” instead of “空手.”

When I use romaji to write Japanese words, I usually add a note saying the spelling is for phonetic purposes only. The technique of writing Japanese words in romaji is a form of conveying phonetic pronunciation. So there is not really a correct spelling. To me, the best spelling is the one that helps you pronounce the word the closest to how Japanese-speakers say it.

ROMAJI HELPS US LEARN JAPANESE AT OUR DOJO

Our beginner students learn counting from one to ten in Japanese. But we don’t push it too hard or too fast from there. Students hear Japanese words in classes, particularly for naming karate techniques. By the time they test for black belt, they know the terminology for most moves and stances. After black belt, we expect students to learn to say the Dojo Kun in Japanese. That is when romaji truly comes in handy. After I could pronounce the Dojo Kun in Japanese, then I started to recognize some of the kanji and kana writing. After that, I learned to write the characters. The writing of kanji teaches a much more in-depth, nuanced look at Japanese words. That made me love the Dojo Kun even more.

The Japanese language has a predominance of certain vowel sounds. They are represented in romaji by letters a, i, u, e and o. But don’t think of your grade school vowels: “a, e, i, o, u and sometimes y” because that will just mess you up here.

Instead, for Japanese pronunciation:

Scroll down a bit in Koichi’s post for a very helpful video to help you hear, practice and learn these vowel sounds.

Romaji helps English speakers to learn to speak Japanese. But it has its limits and drawbacks, the more proficient you become in Japanese. There are a lot of Japanese words that are spoken the same way, but mean two (or more) different things. However, they are written differently in kanji, so if you know the writing, you know the meaning. To complicate things even more, there are several different systems of romaji, using different symbols to convey pronunciations. They can be helpful, but it is easy to become too theoretical and bogged down in details. I think it best to keep it as simple as possible and just keep learning. 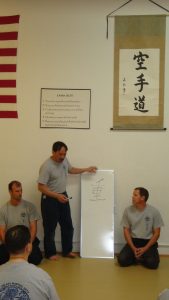