The dojo had six people testing for black belt that year.  The teacher and fellow students were so proud of them.  The whole dojo helped with fundraisers to help the test candidates with the costs associated with testing.

All six students, comprised of male and female, adults and kids, tested at headquarters that year, and succeeded.  They left with new black belts.

The teacher had told them, “I expect you to use your rank to continue training and to help teach karate to others.  Black belt is not an ending goal.” 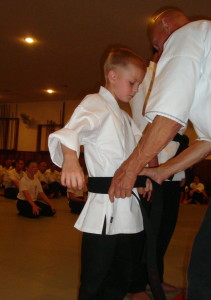 Despite that, the first to quit was a junior.  Karateka 6 did great at camp and testing.  After she got her black belt she did not step into the dojo again.  First, she took a break from karate that summer.  Then, she started high school.  She had a hard time with all the studying.  She didn’t understand that continuing karate training would give her more balance and extra support.  She told her instructor she’d return to the dojo once she got a handle on all the academic requirements.  She never did go back.

Karateka 5 was also a junior, and a teen.  When he was getting ready for black belt, his teacher had to really push and pull him along to get him to work hard, and constantly remind him to keep up with his attendance and get to the dojo a couple times a week.  After black belt, Karateka 5, went back to his old ways.  He showed up at the dojo most weeks.  The teacher certified him.  Then Karateka 5’s mom said he was quitting.

Karateka 4 was a younger junior.  He continued through to his second level black belt.  He was very involved and a great dojo support, despite being young (his parents were also supportive).  Eventually, he “hit a plateau” in his training.  His involvement and hard work steadily diminished, until he was not at the dojo at all.  His dad told the instructor that he would not be coming back to train.  Karateka 4 did show up every now and then to say hello and give moral support to his former dojo mates.

Karateka 3 was an adult.  He did appreciate his dojo family, but he especially appreciated his own training.  Karate had given him: confidence to stand up for himself; a skill he enjoyed learning; and a fun way to work out.  He helped others learn karate and earned his second level black belt.  Then when he got married and suddenly became a father, he stopped training.  It was more and more difficult for him to “find” time for the dojo.  His involvement ended when he stopped teaching.

Karateka 2 was 12 when he got to black belt.  He unfailingly stayed involved with both regular classes and special events.  He was always willing to help his instructor.  He progressed through three levels of junior black belt and then on to adult nidan (second level) when he was old enough.  When he felt he was missing something in his karate, he talked to his instructor and they worked together to augment his training.  Now as an adult, he has the solid support of his dojo family, and he is going places both in karate and in life.

Karateka 1 was an adult when she earned black belt with this group.  She continued helping out and training hard at the dojo every week.  She also helped behind-the-scenes with promoting the dojo and making sure the windows were always clean.  Through the years, she continued supporting the group which unfailingly supported her.  Her long-term perseverance, support and hard work earned her second level black belt, and years later, third level.  She moved to another state, but continued the tradition and now has a little dojo of her own.

Their instructor will never forget these black belts.  He remembers the first four with sadness and regret.  Karateka 2 and 1 are his consolation.  He talks to them and thinks of them with pride and appreciation.

A black belt is something you become, not something you earn.  It takes perseverance and character to be a black belt, and to continue helping and training regularly over the years, and through hard times.  When an instructor in the URKA awards a black belt, they are commissioning their student to walk beside them in the path of promoting traditional Okinawan karate.  It’s not always easy to stay on that path, but it is worth it.

What type of black belt will you be?  You cannot answer that now.  It can only be proven day after day, footprint after footprint.