One benefit of all martial arts is that training in them improves fitness. No matter your style, you will gain physical fitness when you train. There are some additional physical benefits from the specific style of traditional Okinawan karate. That’s what we practice at our dojo. Here are the top five ways that traditional karate builds fitness:

When a student goes to karate class, he expects to get active. That is a realistic expectation. Martial arts are based on moving your body and/or moving weapons. For me, I get exercise in karate while also learning skills and Japanese language and culture. So that makes it fun and interesting, thus disguising the repetition and physical exertion. It takes repetition to learn the moves like punches and kicks. And more repetition to memorize kata and perform it skillfully. So traditional karate builds fitness in class. It also encourages you to practice at home. Both of these get you moving regularly.

A general rule of traditional Okinawan karate is that you consistently work on your strength and stamina. As Gauger Renshi says, “You’ve gotta get stronger than the bad guy.” You will also need to be able to perform calisthenics in class, at tests, and often at camps. These exercises are one way that karate builds fitness. You will be required to do these, in front of people who are consistently testing you. So you just might take the initiative to practice them at home in addition to in class. Thus you improve your physical fitness even more. 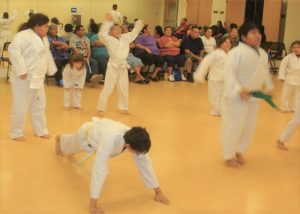 An adult student once came to me and said they didn’t like to do the games in front of the observing parents. I take my karate very seriously and as a Renshi I’m often required to be more somber and stern than I might feel. But I love the games that we usually play at the end of class. The games are often my favorite part about karate. And I love so much about the serious and important parts of training. So I couldn’t sympathize with this student.

Nevertheless, it takes all kinds to make the world go around, and to make a dojo run. So, since that conversation with that adult student, I will usually give an alternative training or fun activity geared to older students. That’s especially when the game may be more enjoyable to kids than adults. And when I have another black belt assisting to supervise. Nonetheless, whether it’s a game, a fun exercise, or a serious activity, the activity at the end of class is another way that traditional karate builds fitness.

Now we get into the ways that our style of Okinawan karate specifically helps fitness. These last two are ways that most other styles don’t specifically have. That’s because we carry on the tradition of the Dojo Kun. It is at the heart of all that we teach and do. We uphold and focus on these principles. Each student and instructor is expected to follow them. We have the positive peer pressure of our higher and lower ranks all looking to us to be a living example of these values. 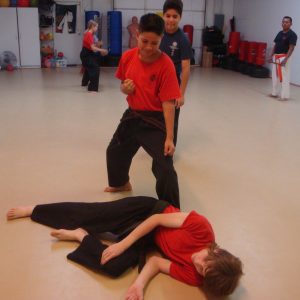 Perseverance: Fall down seven times, get up eight times.

Dojo Kun number three is translated as, “Cultivate perseverance or a will for striving.” We bring that into all areas of life, and it’s definitely expected in the area of physical fitness. Moreover, there’s Guiding Principle number three. It says, “Cultivate a spirit of perseverance. You will develop a healthy body if you have strength of mind and train fearlessly.” That was by Nakamura Sensei, talking about a traditional dojo environment with qualified supervision. Anyway, the kanji of perseverance is about the power of regular steps made over time. Students improve their skill of using this in the dojo until they are able to use it in other fitness areas of life. Thus traditional karate builds fitness through perseverance.

Another fitness tool is available in Dojo Kun number five. It says, “Restrain my physical abilities through spiritual attainment.” This is a great rule for not acting out in anger. But it can also be applied to using self-discipline in other important areas. Your natural inclination may be to use your physical abilities to sit on the sofa, push the TV remote buttons, and lift potato chips. Or you can restrain that and instead use your physical abilities to do things to become stronger and healthier. Like taking a walk, or going through your kata. When your level of self-discipline improves, you can use it to help you achieve your fitness goals. In this way, traditional karate builds fitness with self-discipline.

Traditional Okinawan karate helps you become faster, stronger, more agile and more flexible. It improves your overall stamina. It gives you tools like the Dojo Kun to help you improve your fitness above what is done in class. If you would like to learn more about the practicalities and science of strength and cardio for the karate student, here’s a link to a guide by Jesse Enkamp.